This is a sample guest message. Register a free account today to become a member! Once signed in, you'll be able to participate on this site by adding your own topics and posts, as well as connect with other members through your own private inbox!

You are using an out of date browser. It may not display this or other websites correctly.
You should upgrade or use an alternative browser.

Have any of you owned bengals or have seen bengals? What would you say temperament, size, price differences might be? I'm still leaning savannah, but I'm considering bengals because I heard they are great as well.

I heard savannahs tend to be more "dog-like" as far as loyalty, you can take them for walks, etc... I know each cat has their own personality though. But I wonder if there really is a tendency for certain traits between breeds?

I've had experience with bengals, and used to own a snow female bengal and a snow marble male. They were much more 'wild' in my opinion- the male always tried to get outside and cried loudly by the door constantly. (Yes, they were both fixed). The female was a sweet kitten, but as soon as she matured she became super skittish and basically lives under my brother's bed and never comes out(she bonded with his cat, so he decided to take her).

I've had my Savannah kitten for a bit over a month and she's super loveable and not nearly as skittish as the bengals. I should also mention that the bengals were not from the most reputable breeder....

wolviechick121 said:
Have any of you owned bengals or have seen bengals? What would you say temperament, size, price differences might be? I'm still leaning savannah, but I'm considering bengals because I heard they are great as well.

I heard savannahs tend to be more "dog-like" as far as loyalty, you can take them for walks, etc... I know each cat has their own personality though. But I wonder if there really is a tendency for certain traits between breeds?
Click to expand...


I find the Savannahs in general (!) to be more extrovert than the BGs, and at our place the BGs tend to sleep on top of things while the SVs sleep inside of (often) the same things.

I fostered a couple of BG's for 3 months. Real nice cats. Very active. Very intelligent. Love humans. But the SV's (especially the early generations) have the edge on intensity and persistence.

Staff member
I've not owned a Bengal so mostly my opinion would be based on observation of other people's cats. I think they can be similar breeds in that they are both high in energy and interactive playful cats. But the exotic cat behind the two breeds have different personalities that I think might result in some different influences. The Serval is a confident human-sociable cat that many choose to have as a pet. Not so many keep Asian Leopard Cats as pets as they are more introverted maybe as Per says the Bengals are a little more so. But I think the Bengal breed has selected for great personalities, it just might be that the Savannah is naturally more outgoing perhaps?

I have two BGs a retired snow male that is 8 and a young marble female. . I honestly think you will love either BGs or SVs they both are extremely intelligent and loyal. BGs are known to be a little more shy and timid as the ALC is a very timid exotic . I think a lot depends on the breeders as well...my young BG female is the opposite of shy or timid and is the friendliest. My male on the other hand is much more selective but he had been through eight different breeders before I got him in retirement . The SVs. do tend to cost a little more to get. I think you will be very happy with either : ) I actually got my SV kitten and BG kitten around the same time and they play very well and bonded very quick. They are sisters now and keep each other entertained. You will not regret either decision. and there are great breeders for both breeds. Best luck with whichever choice you make. you will love having. a BG or SV! Hope that helps a little. : )

I have a Bengal but he's a not pure Bengal. He's mixed with a domestic shorthair and he's a little on the shy side but he is very loving and affectionate but extremely high energy. I got Linus ironically because I thought it would cure my desire to be owned by a Savannah but it didn't and Linus and my F5, Whiskey, love each other so much. There are times that I turn off the TV and just watch them play together, that's how entertaining they are together. They feed off of each other's energy and they will run around together late at night and play together. But the thing about Whiskey is that she is very intelligent and a little on the devilish side sometimes. She stole a pork chop from my indoor grill after I finished cooking it and I didn't know where it went to until I saw her chowing on it in my room. I love them both so much. I would encourage you however to do some research, contact some breeders of both breeds or even attend a cat show. Good luck. What ever breed you decide on, you won't regret it and you will be kept entertained, on your toes and challenged as if you had a human child.

Cleo is my SBT Bengal. She's 3 years old, and quite petite compared to Triton and my Manx, Shady. She's the reason we wanted a Savannah in the first place. Her antics have had us rolling on the floor in laughter. She is our living pinball machine; racing at top speed through the house, bouncing off furniture with pinpoint turns. She does flips in mid-air, and can jump at least 6 1/2 feet to the top of our shower door from a complete standstill. I would say she's every bit as persistent as Triton. Her favorite thing to play with is a leather whip. She will drag that thing upstairs and down, through the entire house, in anticipation of someone dragging it around for her to chase. If we don't wake up early enough for her, she'll drag it onto the bed and meow until we get out of bed; then she'll follow us through the house, whip in tow. We've had to start hiding it on her so we can have some peace! She mopes around when she realizes that it has been taken away.

As far as playing "fetch" goes, Cleo will play for as long as you continue to throw the toy helicopter blades. Triton, on the other hand, will walk away after a few tosses. His jumping skills still aren't as honed as hers, though he is becoming more graceful at it. It could be because he has a lot more body to maneuver than she does...I'm just guessing.

Triton loves to play with the whip too, but gets winded quicker than Cleo. He runs like a bullet and can turn on a dime, performing a lot of somersaults. He sleeps in a cat bed on the floor, and she sleeps as elevated as she can get. If there's something Triton really wants, like a sock, pajama bottoms, etc., it's a real bugger to get it away from him. He plays a mean game of "Tug of War", and tries to intimidate with his low growls.

When they say that SVs are perpetual 2 year olds, they weren't kidding! All of our cats are curious, but Triton's always into something! I can trust my girls to run the whole house unsupervised, but not my Triton! If he's out of eyesight for too long, we've got to go see what he's up to.

Comparing Bengals to Savannahs is like comparing lions to panthers. Both are beautiful, exotic, and unique, but they are different breeds of cats. That's why we have one of each!

I have a Bengal playmate for my savannha
The Bengal is more independent and self entertaining .

The savanna needs more human attention and they love to play together . 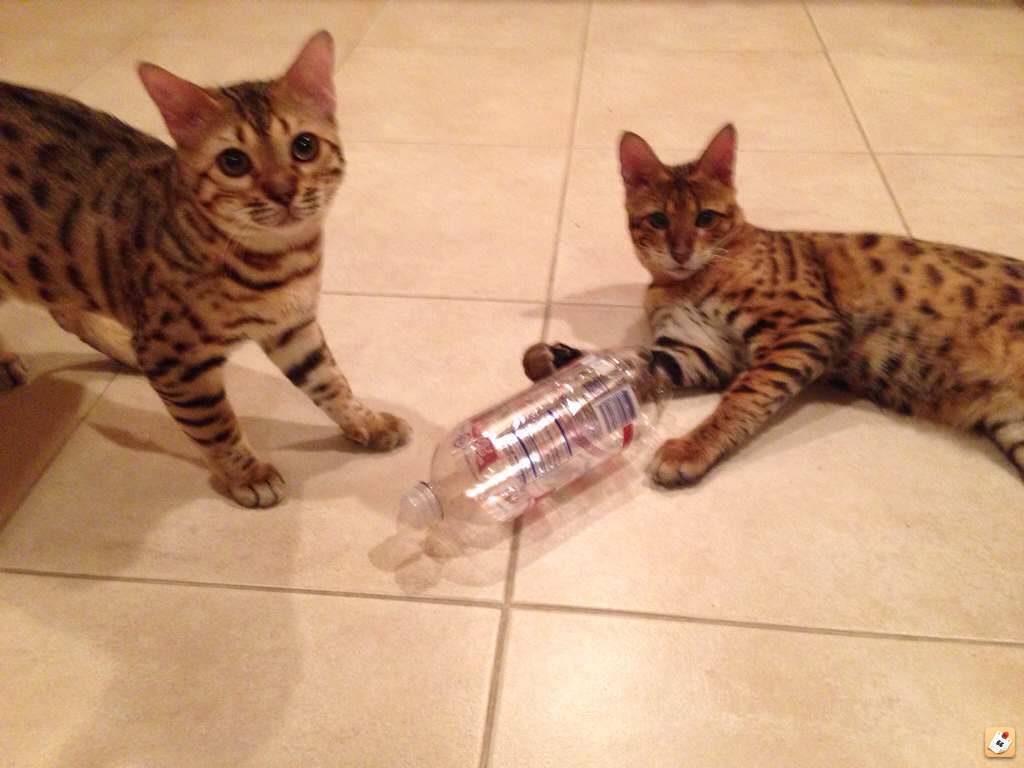 The Bengal is getting more attached to me now after the neutering ...

I have both and it's clear they love each other very much.

The Bengal will be 2 in Feb. and she is just wild, as in very playful, stubborn, graceful and into everything, after all, everything is for her, according to her. She is very sweet and sleeps with us every night and friendly with visitors.

The SV is a F2 and he is standoffish to everyone but me, but he didn't come from a good situation (not meaning his breeder, she is awesome) and we are his third or forth home in his first couple yrs. He has been with us 2 yrs now. He's very loving with me and loves to play, demanding if he wants something, talkative and a clutz and skittish at times.